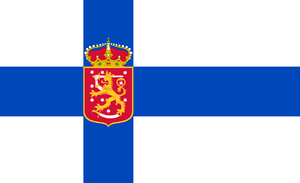 Finland is a faction in Armored Brigade.

During the Cold War, Finland occupied a strategic position between two hostile blocs and was an object of interest to the superpowers as both a buffer zone and an overflight and military transit route. Both sides cultivated the potential to use tactical nuclear weapons against targets in Finnish territory, at least preemptively. Both engaged themselves in intensive intelligence activities in Finland and in the bordering areas. In her pursuit of staying outside of conflicts of interest between the great powers, Finland strove to stay neutral and to get international acknowledgement to her neutral status.

After the destruction of the World War II, Finland had concentrated her energy in rebuilding the country and paying the immense war reparations to the Soviet Union in form of industrial products, in accordance with the Paris peace treaty of 1947. The legacy of the Second World War and Finland's geographic location dictated the key elements in her security policy. Finland chose not to receive Marshall Aid from the USA, as it would have upset the Soviets. Spending on national defense had been kept at its all-time low for a prolonged period of time for reasons of political procrastination, which dragged on until the 1960s.

On 6th April 1948, under Soviet pressure, Finland signed a Friendship, Cooperation and Mutual Assistance Treaty (FCMA Treaty) with the USSR. It was to remain in force until the collapse of the Soviet Union in 1991.

The FCMA Treaty placed an obligation on Finland to defend her territory either by herself or jointly with the Soviet Union in the event of a military threat on Finland or the Soviet Union via Finnish Territory by Germany or any country aligned with it (i.e., NATO). According to the Treaty, the joint measures of defence were to be agreed upon only after mutual consultations between Finland and the USSR, as opposed to an automatic mechanism of action as decreed in the Warsaw Pact or NATO, obliging the parties to joint defence whenever any one of them should become under attack. Despite the difference between the FCMA Treaty and the Charter of the Warsaw Pact, the Treaty with Soviet influence and interference in Finnish politics caused widespread Western doubt and misunderstanding about the status of Finland, a parliamentary democracy "in the hug of the Russian bear". Even if Finland in Western eyes was not regarded as an outright ally of the USSR and if Western statesmen politely acknowledged her neutral status in public, the media often depicted Finland as a "pink" or "grey" zone on the map of Europe, unlike Sweden or Switzerland, which were considered genuinely neutral. However, leaving top-level diplomacy aside, Finnish society and Army remained deeply unsympathetic towards the Soviet Union.

The army consisted of a highly mobile field army backed up by local defense units. Doctrine dictated the use of the heavily forested terrain and numerous lakes to wear down an aggressor, instead of attempting to hold the attacking army on the frontier. As the composition of the Army illustrates, it was a strong light force, suitable for the war in the forests and in the snow, with little reliance on armored vehicles. Emphasis was on infantry, and supporting weapons like mortars and artillery.

Air Force was rather small due to Paris peace talks of 1947, and limited mostly to air defence. Finland was not allowed no more than 60 combat aircraft and a maximum strength of 3,000 men, no aircraft with internal bomb bays, no guided missiles included air-to-air (until 1963) or atomic weapons and no weaponry of German construction or using German parts.

The arsenal of Finland was in value roughly one third from the East, one third from the West, and one third domestic production. The Finnish military had a pragmatic professional attitude in trying to get the most out of it, regardless of the origin.

Until 1960s, Finish armored force consisted of motley collection of World War II legacy AFVs, ranging from German-made Panzer IV and StuG IIIs to quite a number of war booty models captured from Soviets. In 1960 and 1961 a significant number of already obsolete Charioteer Mk.VII and Comet Mk.I were purchased from UK, but they were rather soon outnumbered by deliveries of newer Soviet T-54 and T-55 tanks. Those were soon followed by PT-76s, BTR-50PKs and BTR-60 variants.

T-55 in particular formed the backbone of the Finnish tank force. Finland modernised part of its T-55 fleet into T-55M in 1989, and even reputed them better (FCS, night illumination etc.) than then fresh T-72.

T-72M1 was in use from December 1984. Being an export model, it left a lot to be desired when facing latest NATO and Soviet counterparts. However, average engagement ranges in Finland were expected to be around 500-1000m, which neglected superior fire control and sensor systems and would have likely allowed this tank to use its powerful gun to the full potential.

The Soviet-built BTR-60 series eight wheeled APC has served the Finnish Army faithfully over three decades. Despite their rather temperamental twin gasoline engines, cramped passenger conditions and cumbersome exit hatches the BTR-60PB offered adequate punch with powerful 14.5mm KPVT and lighter 7.62mm PKT machine guns in a relatively cheap and mobile package and it is widely regarded as a versatile APC. The BTR-60PB concept has been widely copied around the world, culminating in the Sisu-XA family with some refinements answering to specific Finnish requirements.

The XA-180 (also known as the Sisu Pasi) is a Finnish made six-wheeled amphibious armoured personnel carrier. The first version was produced in 1983 and serial production began in 1984. It was designed to operate with ease of use, simple structure and low-cost maintenance.

BMP-1 was first of the more modern systems reaching Finland from Soviet Union in 1980s. Autoloader was deemed unreliable and dangerous for no benefit, hence it was was removed together with AT-3b Sagger ATGM which considered obsolete and of little utility.

First twenty BMP-2s were ordered in 1988, but their numbers remained low until 1991.

Finland imported 12 ZSU-57-2 SPAAGs between 1960 and 1961. This vehicles proved inadequate for intercepting fast jets as soon as it entered service: the main weakness of the ZSU-57-2 was the lack of a search or fire-control radar. The vehicle was equipped with an optical mechanical computing reflex sight as the sole fire control system, so it could engage visible targets only. Night firing was also impractical and it couldn't perform aimed fire on the move. However, it was proved it could be employed in a ground support role with great effect due to high firepower.

Another SPAAG, rather unique and worth mentioning, is ItPsv 90 Marksman with 7 units ordered in 1990. It consisted of British made Marksman turret with twin 35mm anti-tank guns on T-54/55 hull, and it was very similar to German Gepard SPAAG in both general silhouette and capabilities.