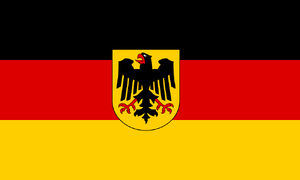 West Germany is a faction in Armored Brigade.

On May 8th 1945 the German Wehrmacht surrendered unconditionally to the Allied Forces of World War II. The American, British, French and Soviet governments took over the control in Germany on all levels. At that point in time it was nearly unbelievable that only ten years later German Military Forces would be created again. Shortly after the end of Nazi Germany the former allies, the Soviet Union and the United States of America, split up because of increasing difficulties in post-war mutual intentions. A first climax of the bitter opposition to follow in the next 40 years was the Berlin Blockade during which the former capital of Germany was surrounded to Soviet forces and had to be supplied from the air to prevent the civilian population from starvation and grieve. To cope with the growing threat from the East, on April 4th 1949 the NATO (North Atlantic Treaty Organization) was founded. The newly formed Bundesrepublik Deutschland (Federal Republic of Germany) became the 15th member of the NATO on May 9th 1955. Only a few days later, the eastern opposing organization, the Warsaw Pact, was founded and the eastern half of Germany, the German Democratic Republic, became a member. At the inner-German border large opposing forces were based. By January 1956 the first 1,500 volunteers formed the first training companies and Bundeswehr was born. In 1969 personnel strength of the German Army reached 305,000 soldiers, and by 1988 it grew to an active strength of 340,000 men and its Armoured Corps consisted of 85 battalions with 5,100 main battle tanks. The Army of the German Armed Forces was transforming into the most-powerful and best-equipped conventional force of NATO in Central Europe.

Throughout its existence the Bundeswehr viewed battlefield agility as the only way to combat the more numerous, but far less responsive, Soviet divisions. Its battlefield doctrine was animated by the concept of Auftragstaktik, or mission-based orders that permitted (indeed, expected) considerable initiative on the part of junior commanders. This approach ensured the German forces in the two World Wars tended to display greater aggressiveness and initiative than their foes, and offered the outnumbered Bundeswehr a chance to withstand the Soviet onslaught. In addition, the Bundeswehr benefitted from realistic training for defending its homeland, and from modern equipment comparable to the best fielded by its NATO allies and often superior to its Soviet equivalents.

Bundeswehr can muster a strong forward defence, with a mobile reserve left to deal with any other incursion routes identified by a recce screen across the more difficult approach routes.

The Leopard 1 is a main battle tank designed and produced in West Germany that first entered service in 1965. Developed in an era when HEAT warheads were thought to make conventional heavy armour of limited value, the Leopard focused on firepower in the form of the German-built version of the British L7 105mm gun, and improved cross-country performance that was unmatched by other designs of the era. During its career, it was continuously upgraded, but protection was still insufficient to face enemy MBTs head-on.

The Leopard 2 is a main battle tank developed by Krauss-Maffei in the early 1970s for the West German Army, with origins from the failed KPz 70 (MBT-70) project in the 1960s. The tank first entered service in 1979 and succeeded the earlier Leopard 1 as the main battle tank of the German Army. All Leopard 2 models feature superior aspects in all areas, a perfect blend of mobility, firepower and protection, albeit at a high price. The Leopard 2 joined the American M1 Abrams and British Challenger as some of the finest examples of Western tank design, while Leopard 2A4 in particular is probably the mightiest tank NATO has to offer. In most engagements, it will probably hit what it is aiming for the vast majority of the time, even when moving and firing at targets at long range, making them effective at ground dominance in the open.

For a long time, Germany was equipped with former US Army vehicles. At the start of the 1970s, it made up for this discrepancy by equipping the German army with domestically built vehicles. Nevertheless, some US vehicles remained in service, for example M48 Patton (modernised with 105mm gun) and M113 armored personnel carriers.